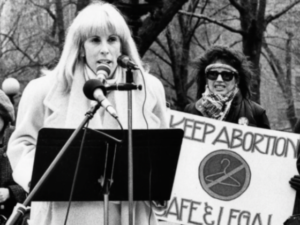 Women’s reproductive rights are under attack today, with several states passing extreme laws restricting abortion and a woman’s right to control her own body.  Nearly 50 years since Roe vs. Wade became the law of the land, legislators in many states are trying to overturn it.

Second Wave activists fought for women’s right to choose.  We proclaimed that the right to control our bodies was one of our most fundamental rights. Women have rights, needs and interests that don’t vanish when we become pregnant.

In the VFA Pioneer Histories Project, Second Wave activists, including Merle Hoffman, are featured for their fight (& their continued fight!).

A lot changed after the passage of Roe v Wade, but what happens now?

Watch Merle Hoffman’s amazing interview for The VFA Pioneer Histories Project below. We also encourage you to visit the VFA website by clicking on the link located below the video.