October is Domestic Violence Awareness Month, and October 18 is the National Day to Wear Purple to spread the message:
Domestic violence happens everywhere all the time and affects everyone. Women are the principal victims. This month, pin purple ribbons on your shirt or coat, tie them on your wrist, braid them in your hair or use in other creative ways to get people talking about this important issue.

In her Message this month, Merle Hoffman talks about why mental health is critical to overall health and discusses her work promoting good mental health, here and in other countries. 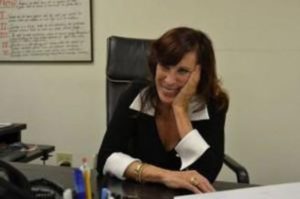 As a student in Social Psychology years ago, I studied the relationship between what happens in society and people’s individual thoughts, feelings and behaviors. When I became actively involved in providing women’s reproductive healthcare, I saw this relationship come to life in the women and girls who came to the clinic. They were not here just for a medical service, but brought their whole world with them—their relationships, economic circumstances, dreams and challenges.

Women were not just their psychology or their uteruses—they were whole individuals who should not be compartmentalized as body parts as so much of the male medical establishment had done for years.

As a 25-year-old psychology student dealing with the first woman who came to Choices in 1971 – whose story I listened to and whose hand I held during her abortion – I understood that womens’ health care was a lot more than one diagnosis and one treatment. Women were a lot more than their pathologies and struggles.

In 1995 I founded Choices Mental Health Center to operate closely with the Medical Center. While I could not maintain a separate facility, many things we accomplished then have been incorporated into the everyday practice of Choices Women’s Medical Center today.

An understanding of the relation between mental and physical health is needed now more than ever as we see intensified attacks on women’s value and self-worth, hand-in-hand with attacks on concrete reproductive healthcare and healthcare generally. The Trump administration and, most recently, the Kavanaugh hearings and confirmation could not be a sharper example. The “boys will be boys” tone of the hearing and the mocking, cruel attitude toward Dr. Christine Blasey-Ford were textbook examples of patriarchal privilege and assertion.

At the same time, Dr. Ford’s testimony was courageous and uplifting, inspiring many to pour into D.C., going right into the “halls of power” and in-your-face to any Senator they saw. Those women acting in righteous anger moved me and millions of women watching around the world. What they did and we do – now and continuing – matters.

We cannot predict the outcome of our actions and we may not be alive to see the results of them. At this point in time I expect very little, but the war certainly will continue and we all must do our part the best we can, in the time allotted to us.

We must have endurance, patience, courage and boldness.

In addition to continuing and strengthening Choices’ work here, I am also spearheading an international effort this fall. The Choices Global Health Institute of Healing and Education, a nonprofit foundation, is teaming up with Project Kesher Russia to make women’s healthcare in Russia more responsive to the needs of women, particularly in the areas of domestic violence and reproductive health care. In November I will travel to Russia with a delegation of activists and educators to meet with various officials and grassroots groups.

Founded in 1989, Project Kesher supports independent, grassroots women’s organizations in Russia, Ukraine, Belarus, Moldova, Georgia and Israel. Over the years it has built a network of more than 180 Jewish women’s groups, 90-plus interfaith coalitions and 3500 trained leaders who work to build civil society and promote gender equality.

I am looking forward to this work and will keep you all informed of developments. 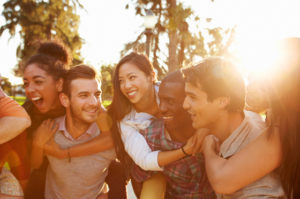 Our Choices newsletter discussed domestic violence in October 2017, 2016 and earlier Octobers. Why are we doing it again? Because “It’s still happening!”

We quote statistics – for instance, that domestic violence is the leading cause of injury to adult women in NYC – and statistics represent real, live people, most of them women, some of whom Choices counselors speak to every day. In addition, domestic violence and intimate partner violence are not only about broken bones and bruises from people we know most closely. This violence is about exerting power and control over another, most frequently, men over women. It can be psychological, sexual, emotional or financial. Whole families feel its impact.

Stella came in to be tested for a sexually transmitted infection (STI) – in fact, she came in several different times, always tested positive and had to be treated. When her Choices counselor explored this with her, it turned out that her partner refused to put on a condom when they had sex. And when her STI tests came back positive he would guilt trip her and accuse her of infidelity. If untreated, this STI could make her sterile. Her Choices counselor explained that it was too dangerous for her to have unprotected sex and encouraged her to stand up for herself and her own well-being. The end of this story has not yet been written, but the last time she came in she tested negative for any infection.

Kayisha, a mother with several children, came in for an abortion. She was trying to cut ties with an abusive partner who, she said fearfully, would “kill me if he finds out I had an abortion.” Her Choices counselor assisted her in contacting an agency that helped her and her children get into a women’s shelter.

Forms of non-physical abuse include withholding money or important documents (such as immigration papers) and controlling access to friends and family by taking away cell phones and other means of communication. Physical abuse often develops after psychological and emotional abuse have become common. And physical and verbal assaults can have a traumatic effect on children. If homelife has partners who are abusive to each other, that can become learned behavior.

Esther Priegue, Licensed Clinical Social Worker and Choices Administrator, points out that “these situations show the importance of women developing a sense of self-worth, that they are valuable human beings and must and can stand up for themselves. They need to understand that their opinions and needs are important and that they deserve relationships free from coercion, threats or intimidation.” She emphasizes that even though partners may claim to “love” the person they abuse, the truth is that “love doesn’t hurt,” and that women need to know that they are worthy of respect and do not deserve any form of disrespect or violence.

They also must have a way out of an abusive relationship if needed, and Choices can help them, including finding a safe place to stay for themselves and their children. We work closely with Family Justice Centers (FJCs) in each borough, run by the NYC Mayor’s Office to End Domestic and Gender-Based Violence. FJCs provide a hub of services, including legal, counseling and different kinds of support, such as finding housing, all free and confidential. Safe Horizons is another valuable resource, providing social services to victims of abuse and crime at 57 locations through NYC,

If you need assistance in dealing with domestic/intimate partner violence, call 718-786-5000 to make an appointment today to see a Choices Behavioral Health Counselor. 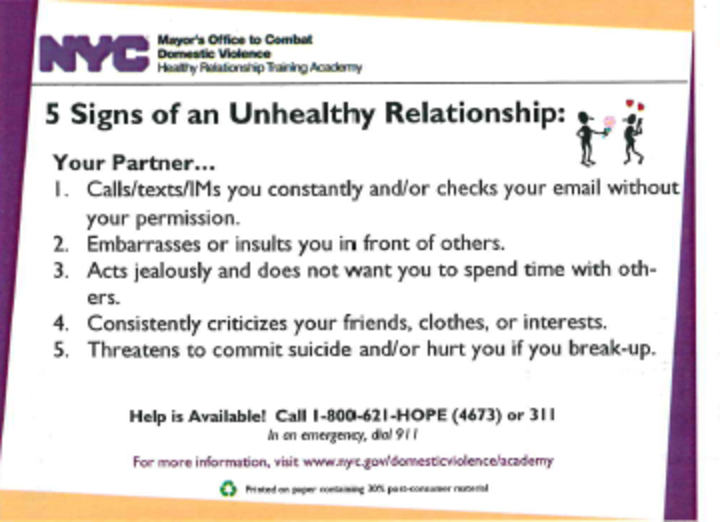 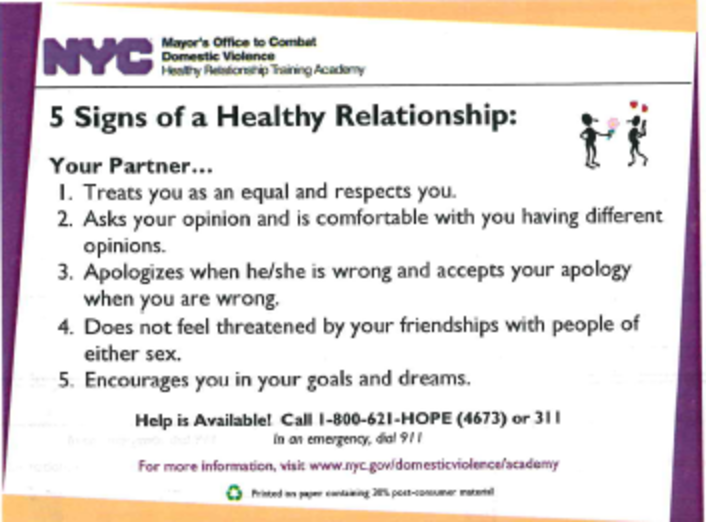 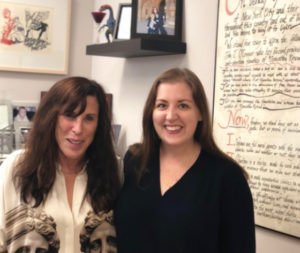 Amber Gavin, Director of Programs for Lady Parts Justice League, visited Choices recently to offer support and tell us about the League – a team of comedians, writers, and producers that uses humor to destigmatize abortion and expose the extremist anti-choice forces working to destroy access to reproductive rights in all 50 states. 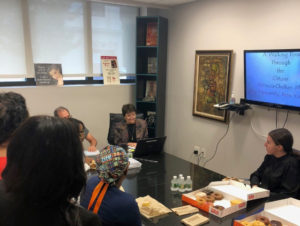 Rebecca Chalker presenting her newest book, The Clitorial Truth, to the staff of Choices

Rebecca Chalker, a pioneer writer and activist in the field of women’s health, talked to Choices staff this month about the recently-released second edition, expanded and enhanced, of her classic book, The Clitoral Truth. She is an Adjunct Professor of Women’s & Gender Studies at Pace University in New York City where she teaches “Hot Button Issues in Sexuality,” “A Cultural History of Sexualities From Prehistory to the Present,” “Lesbians in Literature and Film,” and several other courses. Her website is www.clitoraltruth.com. 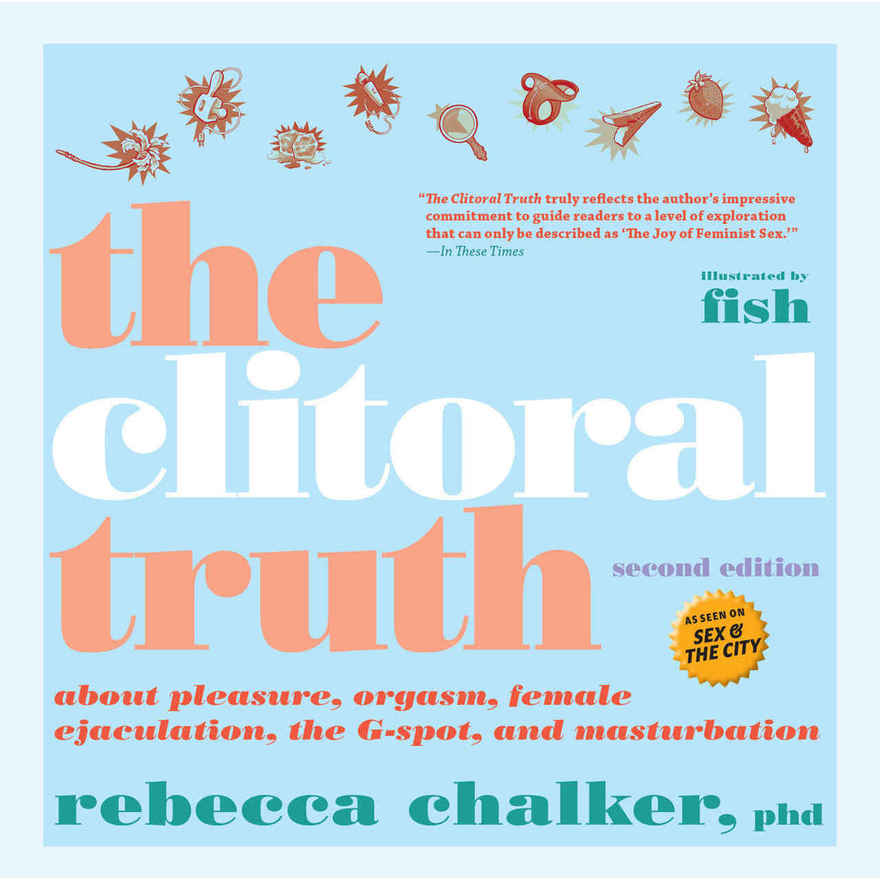 To purchase The Clitorial Truth on Amazon, click here.