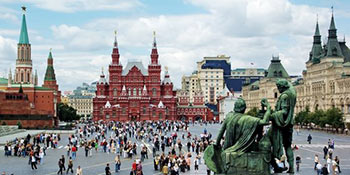 Twenty-five years ago, Merle Hoffman made a groundbreaking journey to Moscow

Twenty-five years ago, Choices Founder and CEO Merle Hoffman made a groundbreaking journey to Moscow bringing contraception, state-of-the-art abortion technology and her catalyzing message of reproductive freedom.
Now in 2018, Merle’s embarking on a return trip with an impressive delegation of activists to learn about the health priorities of grassroots women, engage in discussions with feminists like Alena Popova, and expand and continue Choice’s mission internationally. 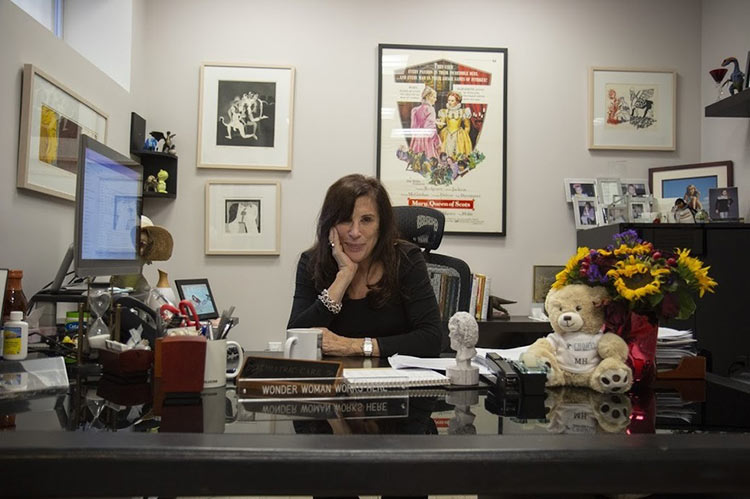 This month’s message is the first post from Merle Hoffman’s blog documenting her trip to Moscow. Follow along here to stay up to date on her travels.

Over 25 years ago, a 35-year-old woman walked through the doors of Choices for her 36th abortion. She was from Russia where it was commonplace for women to have abortions in the double digits. Like so many other Russian women, she was extremely opposed to using birth control because her doctor taught her that the Pill was far more dangerous than repeat abortions, and other forms of contraception were practically unavailable.

After meeting her I found myself fantasizing about going to Russia to take on their brutal system of sexual oppression that women were subjected to. My fantasies became a reality when I met two Russian feminist publishers visiting New York. They were astonished by my philosophy of informed medical consumerism, “Patient Power.”

Two weeks after they returned home I received an official invitation to lead a team of physicians and counselors from Choices to Moscow for an educational exchange. Three months later I was on a plane to Russia accompanied by nine of my staff, carrying visions of being a pioneer and of changing their world. 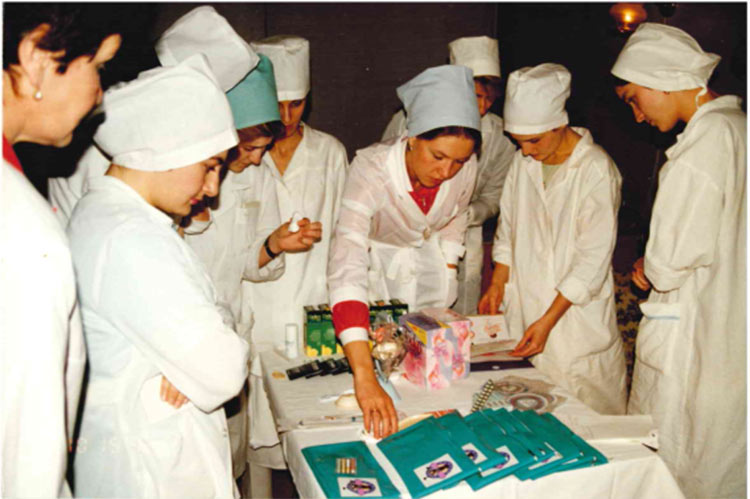 While there, I learned that there were practically no pregnancy tests available in Russia; many women didn’t find out they were pregnant until they were well within their second trimester. In order to receive a state-sponsored abortion at no cost, women needed the approval of three physicians, including a psychiatrist. This bureaucracy led many women to opt for “clandestine abortions,” done in their homes by state gynecologists eager to earn extra money. These unsanitary and dangerous conditions resulted in many teenagers and young women becoming sterile.

I keynoted an educational symposium where I spoke of how reproductive freedom must be the bottom line of women’s autonomy. My staff and I made history that trip by bringing state-of-the-art abortion technology and birth control to the state teaching hospital. About 25 students of anesthesia, gynecology residents and administrative staff hovered around the operating room tables as Choices physicians demonstrated how to use the technology.

Towards the end of my trip, I met with 15 feminists to speak and share information at a “Feminist Round Table.” Out of our intense conversations, we developed a strong letter to Boris Yeltsin demanding adequate reproductive health care for Russian Women. Inga Grebesheva, famous for being the “only woman deputy” of the Central Committee of the Communist Party, delivered the letter to Boris Yeltsin. No reply was ever received.

Since my trip, some headway has been made in the realm of reproductive rights and health. At the same time, Russia is experiencing restrictive abortion legislation inspired by rhetoric all too familiar in the United States. Russian women continue to experience domestic violence at epidemic rates, and there is much room for improvement in access and education on contraceptive care. Needless to say, I’m due for a visit. 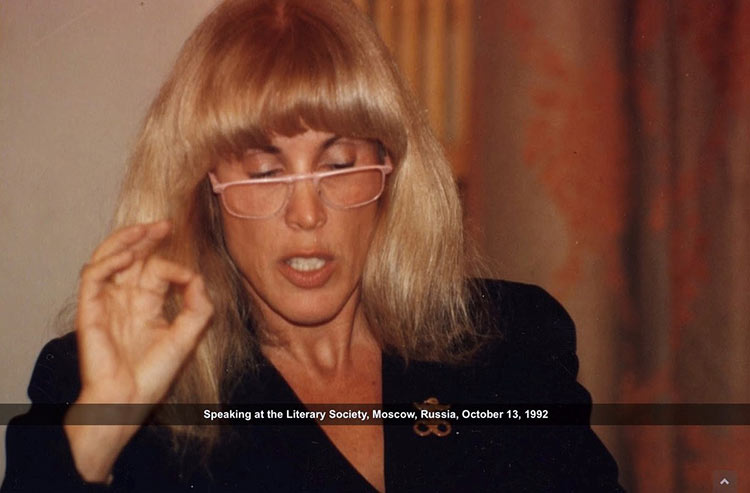 Merle Hoffman speaking at the Literary Society in Moscow, Russia, on October 13, 1992.

I am filled with anticipation and excitement to be going back to learn, speak, organize and create real and needed change. On this trip, the Choices Global Health Institute of Healing and Education, a nonprofit foundation, is teaming up with Project Kesher Russia to make women’s healthcare in Russia more responsive to the needs of women, particularly in the areas of domestic violence and reproductive health care. I’ll be joined on my journey by a delegation of activists and educators, and together we will meet with various officials and grassroots groups.

I will begin my trip by meeting with the Health Advisory Committee to draft a list of health issues facing Russian women and meet with young women to gain an understanding of their health priorities. The following day I’ll join more than 100 feminist activists who work tirelessly on a variety of pressing issues.

During the latter half of my trip, I will be attending a two day General Women’s Conference. The topics covered at the conference will include motherhood and childcare, medicine and psychology, fighting violence and supporting victims, women’s entrepreneurship and more.

I’m filled with excitement and anticipation to be going back to Moscow to build on the work we began years ago. I plan to learn, inspire, catalyze activism and exchange a wealth of ideas.

Stay up to date on the developments of my journey by following Choices Women’s Medical Center on social media for blog posts and updates. Or, go straight to the blog.

Choices is excited to announce our new genetic testing services for our prenatal patients! These tests demonstrate an exciting step forward for Choices prenatal care services. With these tests, Choices is giving women the power of knowing more about their bodies and their pregnancies. These services are possible through our partnership with Natera, a leading worldwide genetic testing and diagnostics company.

These non-invasive testing services will inform patients on:
-Genetic disorders
-Gender of the fetus
-Possible genetic causes of miscarriage based on blood samples

GYN-Horizon, Genetic Disorder Testing:
GYN-Horizon testing is for women and their partners who want to know what genetic conditions they may pass along to their babies.

OB-Panorama and Horizon Testing, Genetic Disorder and Gender Testing
With Panorama screening, Choices is now able to tell patients the sex of their baby earlier than ever before. As early as 9 weeks into pregnancy, a simple blood draw can tell you the sex of your baby. The test will also determine if your baby is at higher risk of having Down syndrome and other common genetic conditions.
Read more about OB-Panorama and Horizon Testing on our website.

Anora Testing, Genetic Causes of Miscarriage
With Anora testing Choices patients who have experienced a miscarriage or stillbirth will gain a better understanding of what genetic conditions they may or may not carry.

Patients interested in any of the new testing options should contact Choices at 718.716.5000 to set up an appointment or talk to their provider during a prenatal visit. 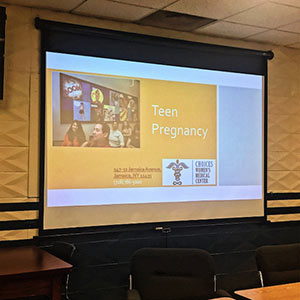 Choices Women’s Medical Center had the opportunity to present a workshop about teen pregnancy to Girl’s Talk, a mentoring group for girls ages 13 to 17 living in Queens

Choices Women’s Medical Center had the wonderful opportunity to present a workshop about teen pregnancy to Girl’s Talk, a mentoring group for girls ages 13 to 17 living in Queens that connects them with officers in their precincts to build community and encourage healthy choices.

Girl’s Talk mission statement is “To mentor girls so that they may find their own voice.” The group provides space for open discussions on topics like domestic violence, bullying, self-esteem, cultural and gender identity, drugs and alcohol, sexual health, and any other issues that may arise for teens living in an unstable home environment.

During the workshop, a team of three facilitators–including a Choices Licensed Clinical Social Worker–went over common myths and misconceptions about pregnancy, teen-friendly birth control methods and where to access them. They also covered the options a woman has if she becomes pregnant and the array of care available to them at Choices. About 20 teens and 10 officers were in attendance and asking questions, creating an open, collaborative environment. The officers shared what information was new to them, demonstrating to the teens that learning about sexual health and wellness is a life-long journey. The facilitators emphasized that they will be supported at Choices no matter what decisions they make, but that the goal is for them to take control of their reproductive health by having a plan for pregnancy. The attendees were equipped with handouts detailing how effective different birth control methods are as well as online resources and Choices “first aid kits” with sexual health supplies. Choices would like to thank the Girls Talk team for connecting with us, we look forward to a continued partnership.