A few years ago I wrote: “…today, as we struggle to define a new standard of feminism, appearance, age, dress, and labels are merely detours, diversions. Thought and action are the fault lines that matter.”

Now in 2019, the fault lines for women’s freedom are the same, and the stakes are higher than they’ve ever been.

March 8, 1908: 15,000 women garment workers, mostly immigrants from New York’s Lower East Side, poured out from the tenements and factories demanding shorter working hours, better pay, the right to vote and an end to child labor. By their determined action they told the world that they and their families refused to be treated like animals. And people heard. In 1913 an international socialist conference in Copenhagen established International Women’s Day in honor of the women strikers. It has been marked ever since around the world with struggle, demonstrations and celebration.

In 1987, March was officially declared Women’s History Month in the USA. With the attacks piling upon abortion and on women’s very right to a life of her own choosing and in some cases on her very life itself, it’s no time for feel-good  pats-on-the-back or congratulatory high-fives.  Read the rest of this newsletter to find out more. And let’s pay tribute to the brave marchers of 1908 by heeding their example and getting ready to pick up the pace of struggle.

NOTE: None of the anti-abortion restrictions discussed here, except those involving public hospitals, are in effect as of this writing. Legal efforts are underway to prevent them from taking effect.  At the same time, the fact that they could become law should be taken seriously and they must be actively opposed. Choices Women’s Medical Center is not affected by any of them at this time, and we continue to offer abortion services to 24 weeks.

Margaret’s Atwood’s novel The Handmaid’s Taleis set in a future society ruled by a Christian theocratic regime where women are tightly controlled and forced into roles serving men. Handmaids are the breeders, forced to have sex with the male rulers and, if they become pregnant, give birth. Wearing red robes like Atwood’s Handmaids has become a powerful and popular visual at pro-choice and women’s marches since Trump’s presidency.  Just as Vice President Mike Pence threatened last year that legal abortion would end in the US “in our time,” we must act with boldness and certainty that this will NOT happen at any time.

Ohio leads the way in cruelty towards women.

In December Ohio Governor John Kasich signed into law an extraordinarily vicious piece of legislation that would outlaw the safest and most common method of abortion in the second trimester of pregnancy. Ohio Senate Bill 145 prohibits the D&E procedure (dilation and evacuation), a 2-day procedure where the cervix is gradually dilated and then emptied of the products of conception. It is a very safe medical procedure.

There is no exception in the law for cases of rape or incest, only if the mother’s life is at risk.

There is no other effective abortion procedure at this stage of pregnancy, so this ban, if legal challenges do not succeed, means that a woman would be forced to go through pregnancy and childbirth. Ohio women will be able to travel to other states for second trimester abortions – as some women come to Choices today from other states – but there is no reason to force them to travel unnecessarily other than discouraging abortion and controlling women’s lives.

Ohio has a number of harmful restrictions on abortion, including:

New Report on Public Hospitals –
When abortion restrictions make exceptions for “the life of the mother,” how close to dying does that require?

Rewire News just released a shocking report on little-known laws in 11 states – Arizona, Kansas, Kentucky, Louisiana, Mississippi, Missouri, North Dakota, Ohio, Oklahoma, Pennsylvania, and Texas – that prohibit abortion care in various kinds of public facilities such as hospitals. This directly hits the poorest and sickest patients who must rely on public hospitals when something goes wrong with their pregnancies. 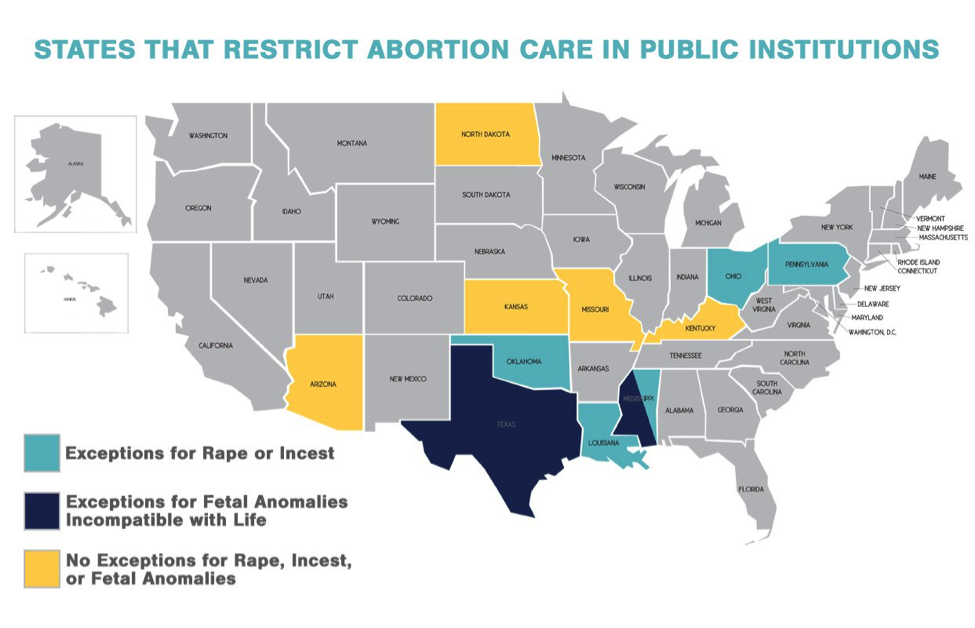 The report tells the story of a woman who arrived at a public hospital in Texas so sick she could not get up from a wheelchair. She was four months pregnant,and needed an abortion to save her life. A previous pregnancy had resulted in heart failure, and this time she faced a higher risk of death from cardiac arrest that increased as the pregnancy developed. But the hospital’s leadership refused to authorize the abortion she needed. The doctor caring for her told Rewire News, “It was decided that she was not going to be dying at that moment. It really was almost a cruel joke that she wasn’t really dead enough to warrant intervention.”

Some states have some exceptions, and although exceptions exist in all 11 states if a patient’s life is in danger, the power of granting an abortion rests with hospital officials who are free to interpret what that means and thus can deny a life-saving abortion.

The analysis was conducted by Guttmacher Institute for Rewire News, and you can read the complete article here.

If the Trump Administration’s changes to Title X are upheld, it will be more than words that are banned. The Title X Family Planning Program, the only Federal program for family planning services, will be crippled. Instead of offering low-income patients a full-range of services and/or information about health options, patients will be directed to so-called “crisis pregnancy” centers and “choices” will be limited to pre-natal care and adoption.

Under the current law, providers are required to offer patients a full range of options, but the “gag rule” will prevent clinics with Title X funding from either referring patients to abortion providers or discussing abortion as one of their options. The changes will not go into effect until about two months and lawsuits have already been filed to stop this terrible impact on women’s lives, but part of the damage is that women – especially low-income and people of color – feel  threatened already.

The Trump Administration’s rule change goes farther than ever proposed before. It requires medical providers in Title X clinics to withhold information about abortion services or offer referrals to abortion providers.  Also, anyone pregnant must be referred to prenatal care and may be referred to an adoption center, even though they do not want to carry their pregnancy to term. And clinics that want to keep receiving Title X funds will have to go through costly physical renovations to separate any abortion-related services.

Fortunately, legal challenges have already been filed. A coalition of 21 State Attorneys General, including NY State AG Letitia James, one of the leaders of the effort, filed a challenge to the constitutionality of this new “gag rule” altering the Title X family planning program.  For more information, read a full account here.

Women’s History Month is a good time to discuss and address the difficulties of being female in a diversity of societies in the world today. The World Health Organization has done just that in a report on Gender Disparities and Mental Health.

Depression, anxiety, psychological distress, sexual violence, domestic violence and escalating rates of substance use affect women to a greater extent than men across different countries and different settings. Pressures created by their multiple roles, gender discrimination and associated factors of poverty, hunger, malnutrition, overwork, domestic violence and sexual abuse, combine to account for women’s poor mental health. There is a positive relationship between the frequency and severity of such social factors and the frequency and severity of mental health problems in women. Severe life events that cause a sense of loss, inferiority, humiliation or entrapment can predict depression.

In other words, the pressures on women from a diversity of cultures, backgrounds and family structures are REAL – they are products of being female in today’s world.   When you come to Choices Women’s Medical Center for any of our services, our Counselors and Behavioral Health Professionals are here to assist you, as well, as part of our holistic approach to health care.