How racism in healthcare is putting the lives of black women at risk.

In recent weeks in every state, in major cities and smaller towns, people of many different backgrounds, ethnicities, races, and genders came together in unprecedented outpourings to express their anger and anguish at the murder of George Floyd and so many other Black people over the years.

BLM Protests break out across the country, from The Sunday Post

White supremacy and racism have been righteously challenged on many fronts.

Standing with all those who say, “Black Lives Matter”, Choices Women’s Medical Center reaffirms our commitment to serve people of every color and background with the best medical care possible and to be part of bringing racial justice and a new society into being.
From its beginning in 1971, under the guidance of Founder Merle Hoffman, Choices has prioritized the care and well-being of every patient, no matter their race, age, gender, economic or citizenship status. Choices has found ways to assist people financially so no one is refused care (including onsite Emergency Medicaid signups for same-day visits), and has remained dedicated to providing the reproductive health services they need in complete confidentiality and with the greatest compassion and medical skill.

A major reason Choices moved to its present location in Jamaica, Queens over eight years ago was to help meet the needs of an underserved community, as reported by the NYC Department of Health and Hygiene in its 2006 Community Health Profile. The report said that Jamaica ranked below average (in the bottom 10 of 41 NYC neighborhoods surveyed) for “Having a Healthy Baby.” This was because:

Choices, with its comprehensive GYN care, including birth control counseling and abortion services to 24 weeks, and full Prenatal Program, has the knowledge, the medical experience and woman-centered approach that meets these needs, and more. With factual sexual health education, family planning, options counseling, and a Pre-Natal Program that ensures women of all ages who choose to give birth have healthy pregnancies, Choices has become a beacon of hope and help.

Of course, it’s not only Jamaica, Queens where people suffer because of inadequate medical care. During the peak of the COVID-19 pandemic in NYC, communities of color suffered the most from the novel virus and were most devastated by deaths. Patients often had preexisting conditions (such as asthma, diabetes) that could make them sicker, and hospitals in poorer communities quickly became overwhelmed. (See our interview with Choices Director of Anesthesia Dr. Evans Crevecoeur about his experiences caring for people at Jamaica Hospital) 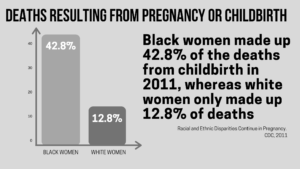 Within these communities, pregnant women have particular vulnerabilities. There is a huge disparity in the numbers of women of color who die of pregnancy-related causes and white women who do not. The Centers for Disease Control (CDC) reported in May 2019 that African-American, Native American, and Alaska Native Women die of pregnancy-related causes at a rate about three times higher those of white women.

A 2019 New York Times article stated that “The United States has an abysmal record on maternal health, compared with other high-income countries. Even as maternal death rates fell by more than one-third from 2000 to 2015 across the world, outcomes for American mothers worsened, according to Unicef.”

The stark imbalance in maternal mortality between black and white women points to racial inequalities in all aspects of life–economic, social, healthcare, and more– as the underlying societal cause.

Serena Williams in her prime.

It is not solely her neighborhood, her education level or what her income is that endangers pregnant Black women’s lives. Serena Williams, winner of 23 Gland Slam singles tennis titles and one of the most well known and highly paid athletes in the country, had a frightening experience during pregnancy and childbirth that put her life at risk. Williams has a history of developing blood clots, and after delivering her daughter Olympia in an emergency C-section, she could tell something wasn’t right. Serena tried to tell her nurse she needed a CT scan and blood-thinning medicine but the nurse did not take her seriously. Fortunately, a doctor finally listened and tests revealed potentially fatal blood clots in her lungs. Such unacknowledged racism – disbelieving or discounting the concerns and symptoms of pregnant women because they are Black – has been shown to play a role in deadly mistreatment.

Another example: The Washington Post reported in 2018 that the NYC Department of Health and Mental Hygiene published an analysis of five years’ worth of data showing that Black college-educated mothers who gave birth in local hospitals were still more likely to suffer serious pregnancy- or childbirth-related complications compared with women of other races or ethnicities who never graduated from high school.

“Black women are treated differently because of the color of their skin,” said psychologist Fieda Jackson in the Fusion documentary, The Naked Truth: Death by Delivery. “Many don’t know their rights and suffer abuses, and they don’t have insurance. And they also suffer from sexism. They are Black and they are women. There is no rest for them in these circumstances.” 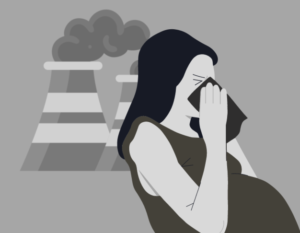 “Just recently JAMA Network Open, part of the Journal of the American Medical Association, published an extensive new study revealing yet another huge threat to the health of mothers and babies, especially when they are Black. The study revealed that all pregnant women exposed to high temperatures or air pollution are more likely to give birth to babies who are underweight, premature or stillborn, and African-American mothers and babies are at greatest risk. Communities of color are more likely to be located closer to power plants and less likely to have air conditioning or be able to afford high electric bills, in addition to having less access to good medical care and other resources. Premature birth and low birth weight can have huge lifetime consequences impacting brain development and susceptibility to disease. Black lives truly matter and are in danger in so many ways.

These are huge problems which demand major, immediate national attention and resources.

The horrendous, systemic racial inequalities in this society, including the country’s health care system, must be addressed. For its part, in particular the continuing great need to protect the health of pregnant Black women and their babies, Choices Women’s Medical Center will continue to be here for you.