Merle Hoffman: Courage In The Face Of Hate

An enormous oil painting of Queen Elizabeth I hangs, rather fittingly, over a fireplace of Tudor-era proportions in the Northwest Woods house of Merle Hoffman, a pioneer in women’s reproductive health care who established one of the first ambulatory abortion centers in the nation in 1971 in Manhattan.

“That’s me,” Ms. Hoffman said, laughing and pointing to the portrait of Britain’s Virgin Queen wearing a magnificent gown and a faint, enigmatic smile. “Painted by my friend Linda Stein.”

It all makes sense once she tells her story, which begins with a solitary, bookish child devouring historical tales and creating warrior fantasies that eventually materialized into real-life battles, power struggles, evil oppressors, and noble causes.

Ms. Hoffman describes her entire career, which began while studying at Queens College in 1970 and working for a doctor who provided abortions, as a battle. “I’ve been on the front line for 46 years,” she said. 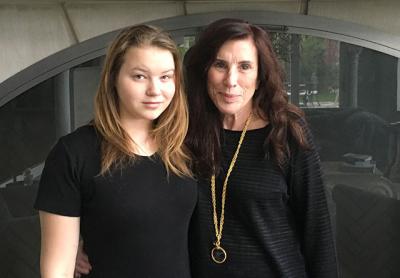 The front line, that is, of the war waged over abortion rights, which still remains under ferocious attack 45 years after the landmark Roe v. Wade Supreme Court decision made abortions legal across the United States.

In 1971, together with the doctor she worked for, Ms. Hoffman started Choices, the first legal clinic in the United States to provide abortions; they were legal in New York since 1970. It was her very first patient from New Jersey who altered her trajectory from a hopeful concert pianist to pro-choice crusader.

“Imagine that,” Ms. Hoffman recalled in her waterfront home on the eve of Mother’s Day, “just across the river in New Jersey, abortions were illegal.” Her patient, she said, was white, married, Catholic, and so economically stressed that she could not have the child. “It was so powerful.”

And so, the rescue fantasy that consumed her as a child began to play itself out over her remarkable life. In 1977, she co-founded the first national professional organization of abortion providers, the National Abortion Federation, and became its first president. She publicly challenged anti-abortion leaders such as Jerry Falwell and New York City’s Cardinal John O’Connor by organizing the first pro-choice civil disobedience action on the steps of St. Patrick’s Cathedral in 1989. She also founded the New York Pro-Choice Coalition and helped develop a national strategy for defending clinics against blockades, harassment, and attacks. She campaigned and protested relentlessly, always wielding her iconic six-foot-long coat hanger, a reminder of the illegal back-alley abortion industry.

In 2012, celebrating the 40th anniversary of the opening of Choices, she published her memoir, “Intimate Wars: The Life and Times of the Woman Who Brought Abortion From the Back Alley to the Boardroom,” which chronicles all of the above as well as more personal details, such as her own decision to have an abortion as a young woman, her decision at 58 to adopt a daughter, her affair with and eventual marriage to the physician she worked for, her experiences running Choices, and constant death threats.

In person, she spoke about being evicted from her LeFrak City office because Richard LeFrak, the son of the developer, had problems with the patient population.

“There were always groups of people shouting horrible things like ‘Burn in hell,’ and he didn’t want that,” she said. Today, she has called these sidewalk protesters “the American Taliban,” comparing their religious beliefs to the Taliban’s “misogyny and fundamentalism.”

Until very recently, Attorney General Eric T. Schneiderman represented the escorts of women arriving at Choices against the “bullying” of protesters outside.

In 2012, Ms. Hoffman decided to move Choices from Long Island City to a newly built “state-of-the-art facility” in Jamaica, Queens, where 78 percent of her patients are from. The center has become a full-service women’s health facility, offering complete gynecological ser­vices, a prenatal department, abortion services, as well as outreach programs for sex education and rape counseling.

“We even offer seniors the services they need, because sex never gets old,” she said, laughing.

In 2016, Choices was one of only four clinics across the U.S. where a groundbreaking new experiment was launched, allowing women to obtain abortion-inducing drugs through the mail.

The center is not, as one might assume, a nonprofit entity. Early-term abortions cost $425 and those close to the legal limit of 24 weeks cost $2,000. Insurance covers some while other women pay with cash. The fact that Ms. Hoffman has openly delighted in the fact that women’s business is her business has raised eyebrows among the most strident feminists, even though the clinic provides health care at reasonable prices, Medicaid is accepted, and it offers help for the undocumented. “We rarely turn anyone away,” she said.

“It’s an oasis. We have generational patients who come here for all sorts of gynecological treatments. Abortions are only 40 percent of our business,” she explained. There is no board of directors; she is the sole decision maker, a role she refers to as “a collective autocracy.”

The autocrat appears to be doing just fine, as her grand weekend house in the tony Cedar Point Park enclave attests. The Elizabethan Age theme echoes throughout the castle-like residence, which was rebuilt after a 2015 fire decimated the original. The F.B.I. was called in to investigate the incident, given her affiliations.

Inside the hefty arched wooden doorway, it’s all soaring ceilings, winding staircases, and baronial chandeliers. There’s even wallpaper printed to look like excavated medieval bricks. It is a world that conjures an era of tallow candles and velvet draperies, menacing shadows, and distant footsteps echoing on flagstones.

But to Ms. Hoffman her house is simply “a physical manifestation of my consciousness.”

Instead of dreaming of a fantasy, she said she is actually living hers. “It’s today. This is my dream. My life is meaningful, challenging, stressful, and extremely exciting at times.”

The people of Ireland go to vote on Friday, May 25, on a referendum to decide whether or not to liberalize one of the most restrictive abortion regimes in the world. Only three days before that, here in America, President Trump will keynote the Susan B. Anthony List’s 11th annual Campaign for Life gala. Anti-abortion groups around the country have heralded the Trump administration for taking many actions targeting abortion, including his reinstatement of the so-called Mexico City policy, which prohibits federal money from going to international organizations that discuss, provide, or offer referrals for abortion ser­vices.

And Margaret Atwood’s disturbing dystopian tale of female subjugation, “The Handmaid’s Tale,” is hugely popular on the small screen.

“We should have absolutely seen all this coming,” was Ms. Hoffman’s reaction to these strange times. “We should have been more strategic in our plans. Now we’re just defensive.”

And so her war continues. But luckily, she does seem to be blessed with the same sangfroid as her Elizabethan mentor.

Originally published in The East Hampton Star, May 17, 2018